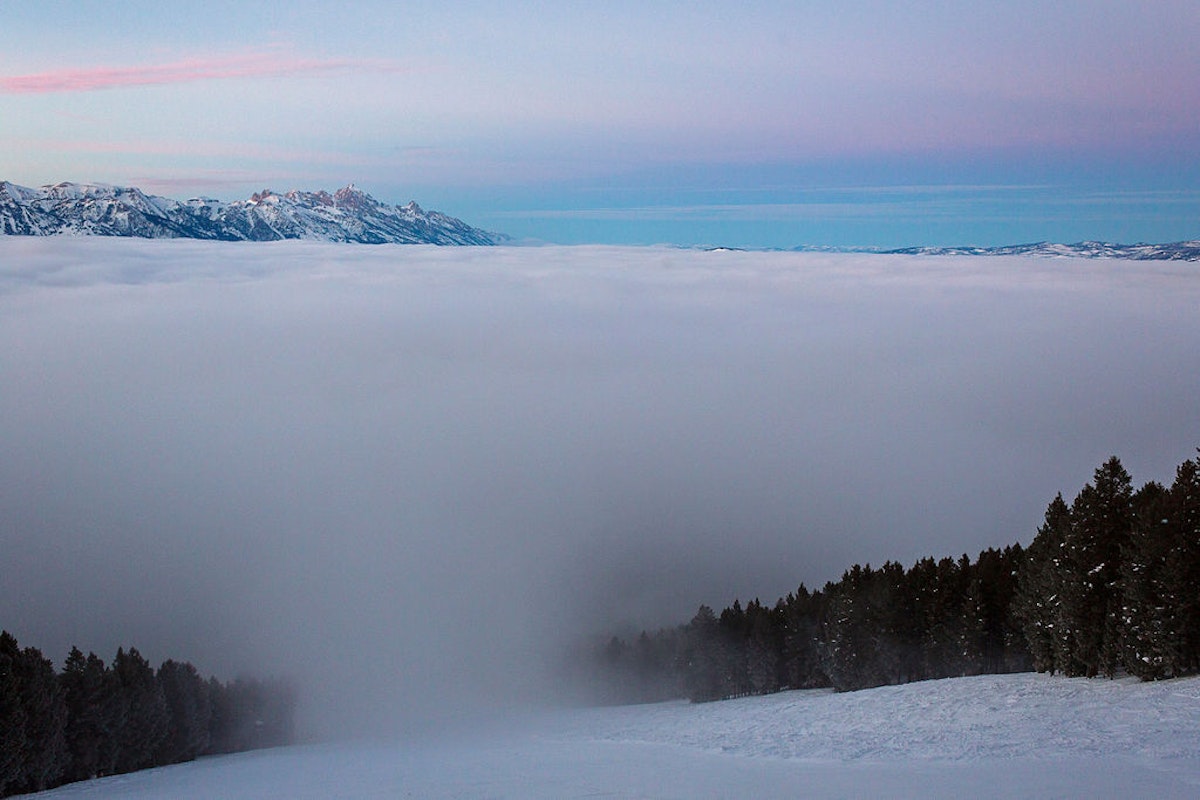 Myths and Legends of Jackson Hole

Its scenery and wildlife alone make Jackson Hole a legendary place. The rugged peaks, alpine lakes and roaring rivers have survived the test of time and will for eons to come.

It’s only natural, then, that such a place should also contain centuries of rich, one-of-a-kind stories. Some are fact. Some are fiction. Some are too old to know for certain. All of them are testament to the grit and perseverance of the characters who have called Jackson Hole home throughout its history — because it’s also Jackson’s very human characters who make the place legendary.

Read on to learn about the myths and legends of Jackson Hole. 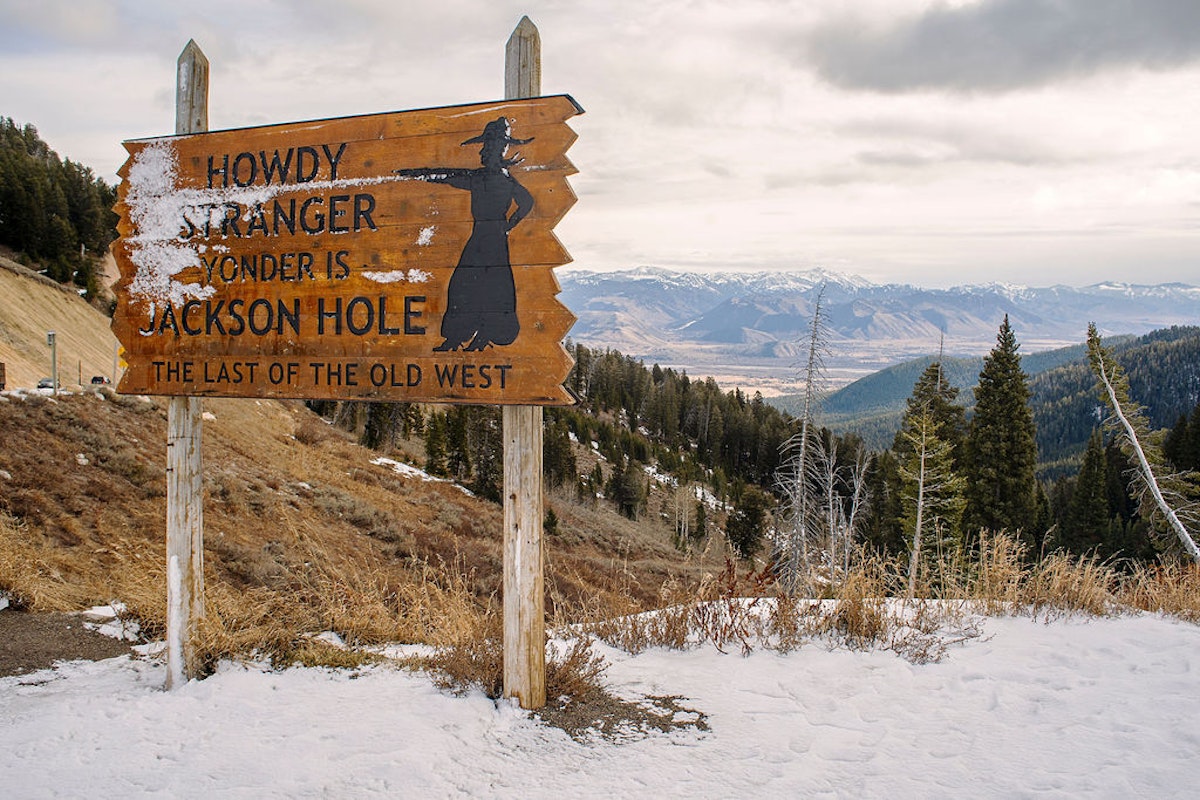 A “Howdy stranger, yonder is Jackson Hole” sign welcomes drivers at the top of Teton Pass.

First, the name. While many know it by Jackson Hole, the town itself is actually just “Jackson.” “Jackson Hole” refers to the entire valley that rests at the base of the Tetons, extending from Hoback to Moran north to south, and Jackson to Wilson east to west.

Both the town and the valley are named after David “Davey” Jackson, a trapper who in 1822 responded to an ad for “100 enterprising young men to ascend the Missouri River to the Rocky Mountains, there to be employed as hunters.” Jackson immediately took to the Snake River and its abundant offerings, and kept returning to the valley to trap and hunt. He was not the first trapper to call the valley home, nor would he be the last. But Jackson and his cohorts would help define Jackson Hole as a place of exploration and escape for centuries to come — perhaps even forever.

“Someday, someone will ski that”

The phrase that would change skiing forever, both in Jackson Hole and around the world. Barry Corbet uttered these words about the now-infamous Corbet’s Couloir in 1960. Corbet, for whom the run is named, gazed upon the narrow chute framed by dramatic granite cliffs and challenged extreme skiers with just five words.

Local skier Lonnie Ball would rise to the challenge seven years later and become the first person to ski the iconic chute. Measuring just 10 feet wide at the top, Corbet’s is still regarded as the most extreme inbound run in America. 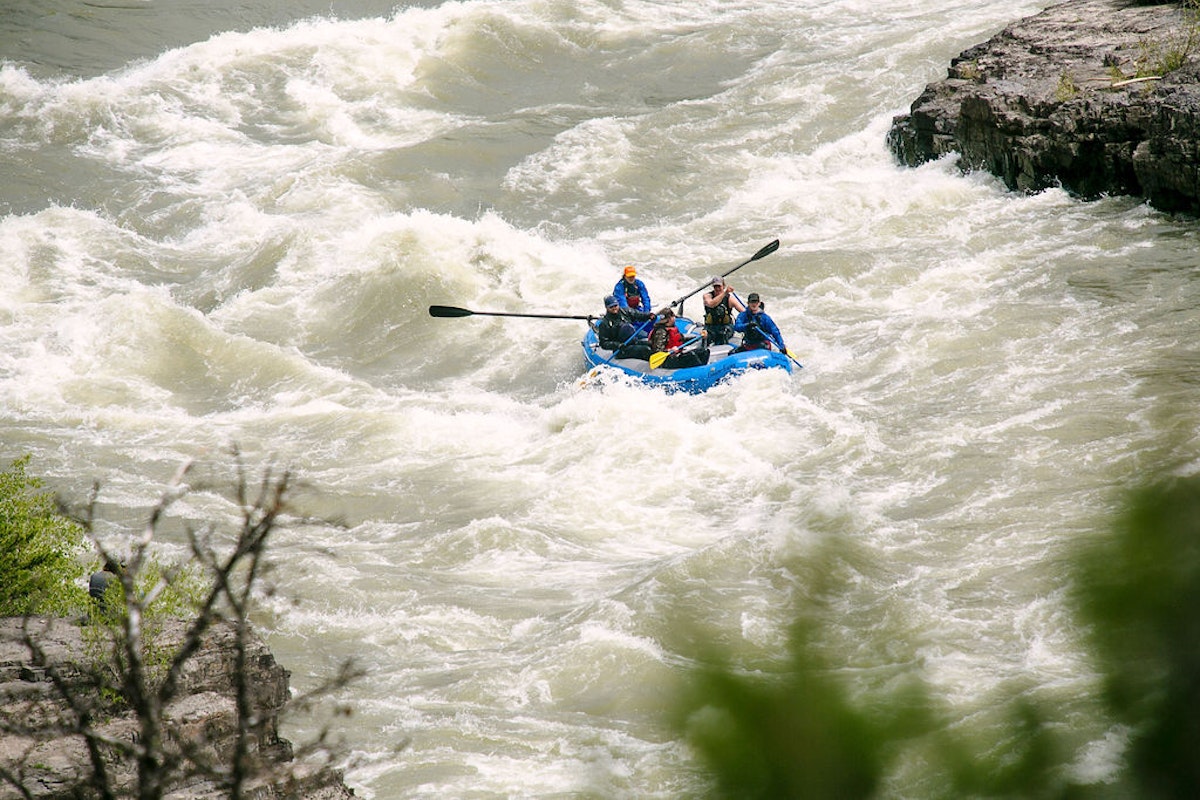 Rafters make it through the Lunch Counter rapids on the Snake River.

The pigeons of the Snake

Clients who float the whitewaters of the legendary Snake River Canyon can now find photos of their most thrilling moments online almost as soon as they get off the river. But in the early days of commercial river rafting, before the internet allowed us to relive our memories immediately, one river guide found another way to share photos with guests.

On the Snake River Canyon, the best photos are captured on the other side of the river from the road. That’s where the action is. The challenge in the ’80s was getting film back across the river into town before the guests got back.

The solution? Pigeons. One guiding company, fully committed to selling “floatographs” to clients, started its own pigeon-racing team along the Snake. Hungry and trained to fly fast, pigeons would carry rolls of film from the photographer’s perch back to the outfitter’s office in record time. They were wildly successful — until nature intervened. As it happened, the US Forest Service had also started reintroducing peregrine falcons to the forest. Peregrine falcons were an endangered species, and perhaps the only bird of prey fast enough to catch a carrier pigeon.

Still, the pigeons persisted for years, until technology put them out of a job. Floatographs are now an entirely digital enterprise, and clients can see their action shots on their phones before they even make it back to the office.

Margaret “Mardy” Murie is no myth, but her legacy of conservation is the stuff of legends. Few people have done more to preserve Jackson Hole and its wildlife than Mardy and her husband, Olaus. Mardy was the first woman to graduate from the Alaska Agricultural College and School of Mines in 1924. She and Olaus moved to Jackson in 1927. Nearly 20 years later, the couple bought the ranch that will carry their name for as long as it stands. The ranch would become a home base for decades of work in wildlife research and conservation. After Olaus died in 1963, Mardy dedicated her life to furthering his legacy in wilderness protection. She travelled the world with her conservation message.

Mardy sold the ranch to Grand Teton National Park in 1968 but lived there until her death in 2003. In her life, Mardy won the Audubon Medal, the Sierra Club’s John Muir Award, the Wilderness Society’s Bob Marshall Award and the Presidential Medal of Freedom. She was one of the first women to be celebrated in conservation.

Mardy inspired younger generations of conservationists, oftentimes simply through conversations on her front porch, and The Murie Center still serves to educate national park visitors about the importance of wildlife preservation. 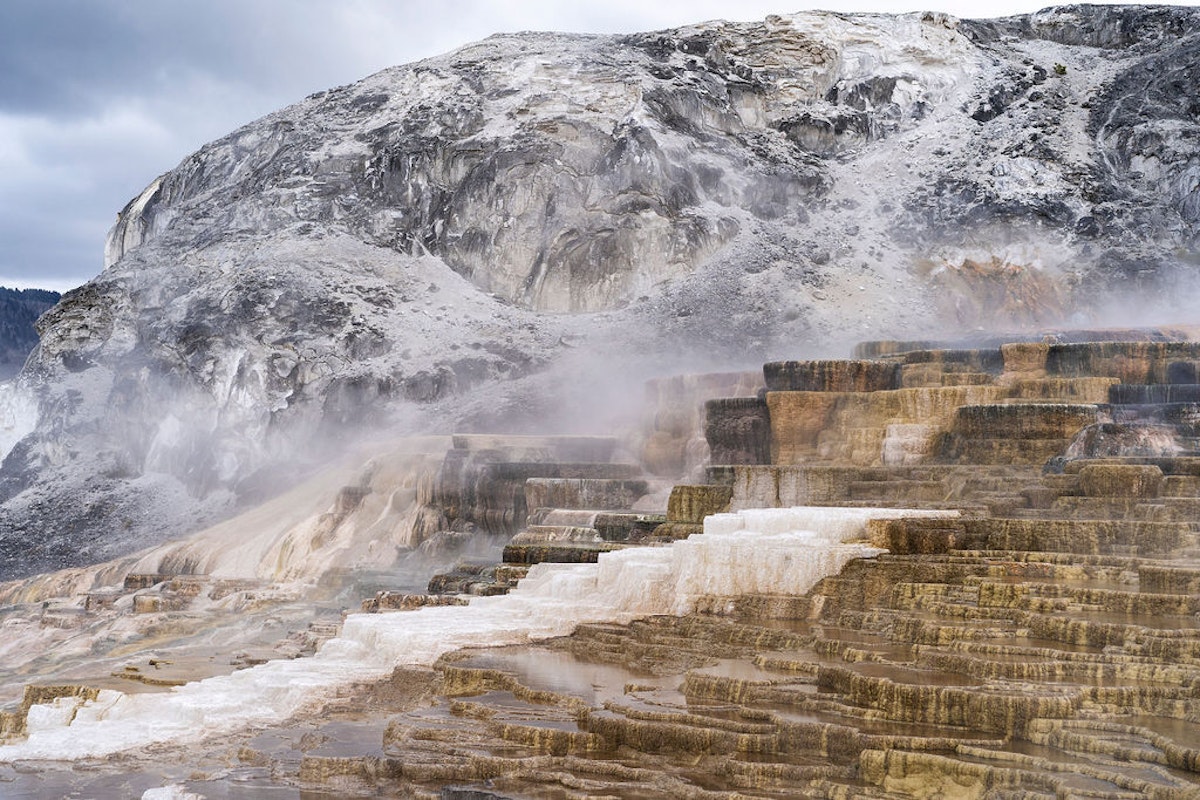 Mammoth Hot Springs in Yellowstone billow with steam from the earth below.

OK, so there’s a little scientific truth to this myth. Yellowstone is, in fact, an active volcano. A supervolcano, even. The last major eruption was 640,000 years ago. There are those who think it’s overdue for another big one. The results of such an eruption would, indeed, be catastrophic. But scientists at the Yellowstone Volcano Observatory have been closely monitoring it for decades. Will it erupt? Maybe one day. In our lifetime? Highly unlikely.

Scientists predict that if we see any volcanic activity in the next several hundred years, it will just be lava flows, which would ooze slowly and allow plenty of time to escape safely. There’s no real science to suggest that any major activity is overdue, or even due. Myth: busted. 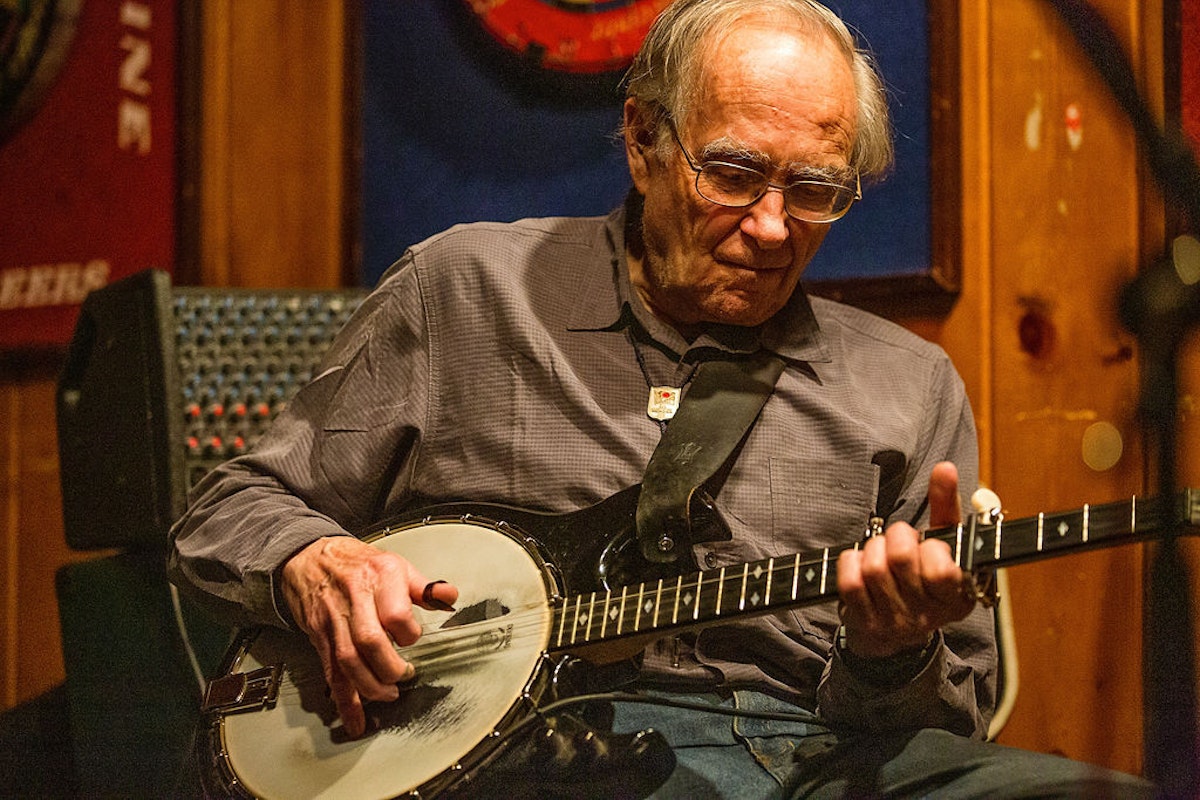 Bill Briggs plays the banjo during Sunday Church at the Stagecoach.

In a dive bar at the base of Teton Pass, 89-year-old Bill Briggs performs for a crowd of ranchers, ski bums, locals and tourists alike. Country western, swing and folk music emanates from the small stage, where Briggs has played nearly every Sunday for the last 50 years. February 16, 1969, marks the beginning of what’s now passionately known as Sunday Church at the Stagecoach Saloon in Wilson, Wyoming. On the wall adjacent to the stage is a small framed photograph of Briggs and a young Bob Dylan jamming together in the early 1960s.

But Sunday Church isn’t what solidified Briggs’ legendary status in Jackson Hole. No, that was pioneering the sport of ski mountaineering. Briggs claims first descent of the towering 13,776-foot Grand Teton peak on June 15, 1971. No small feat considering the gear available, and a surgically fused hip a few years prior. Briggs was a mountain guide for the renowned Exum Mountain Guides, where he became familiar with the Teton Range. While the first descent of the Grand Teton stands out among mountain guides and skiers alike, he didn’t stop there. Briggs also holds the first ski descent of both the Middle and South Tetons, Mount Moran, and Mount Owen.

“I don’t call the skiing I did ‘extreme,’” Bill told WildSnow in 2014. “This was mountaineering, this was being careful. This was not jumping off cliffs ­­–– I really want to make that distinction.”

Regardless, it’s no surprise that Briggs is widely regarded as the father of ski mountaineering in the United States. He was inducted into the U.S. Ski and Snowboard Hall of Fame in 2008. 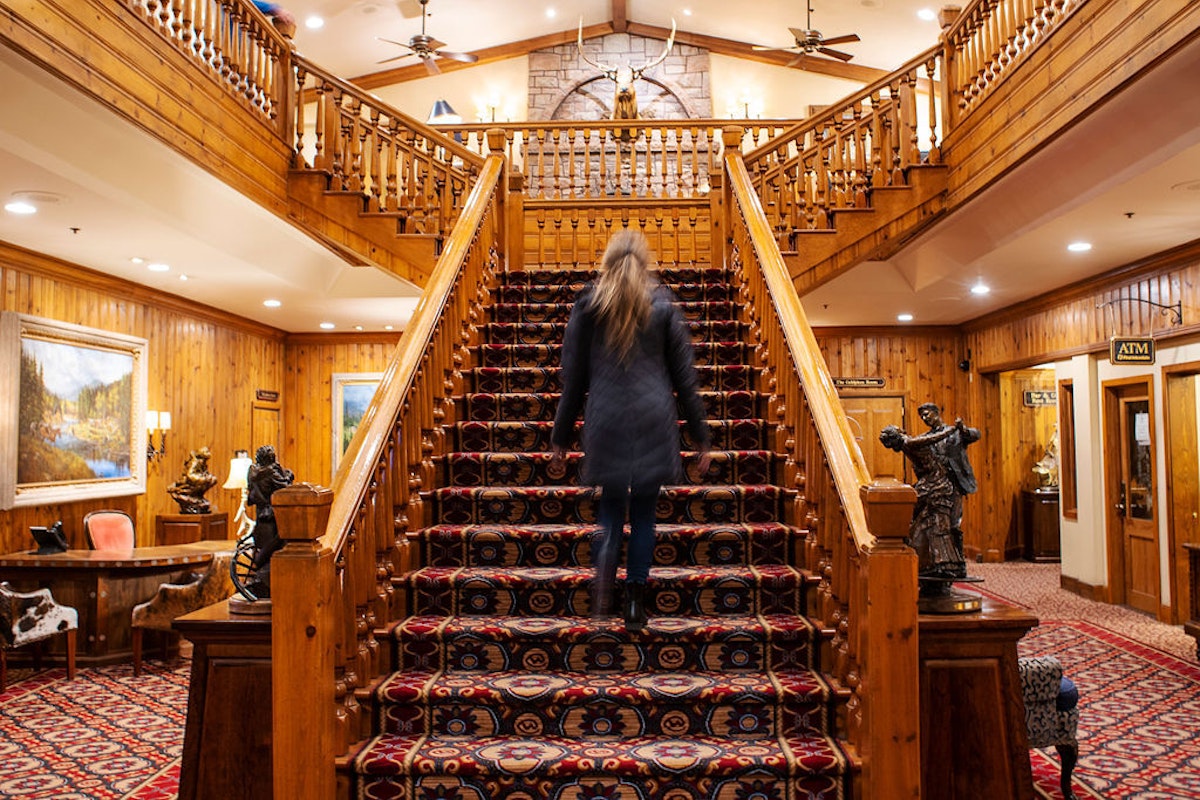 Hauntings in the Hole

With such a rich western history, it’s not that hard to believe in a few ghosts of Jackson’s past. If spooky stories are your thing, Jackson Hole Ghost Tours takes visitors to some of the valley’s more haunted hubs. You’ll likely stop at the Wort Hotel, where two young girls, allegedly murdered in August 1964, have been reportedly seen on the stairs and heard in the halls. You may also stop at the Playhouse, where friendly ghosts of past performers guard the theater and occasionally cause some mischief.

Both the Wort and the Playhouse contain decades of non-haunted history, too, and are worth visiting for their classic western vibes and warm hospitality. 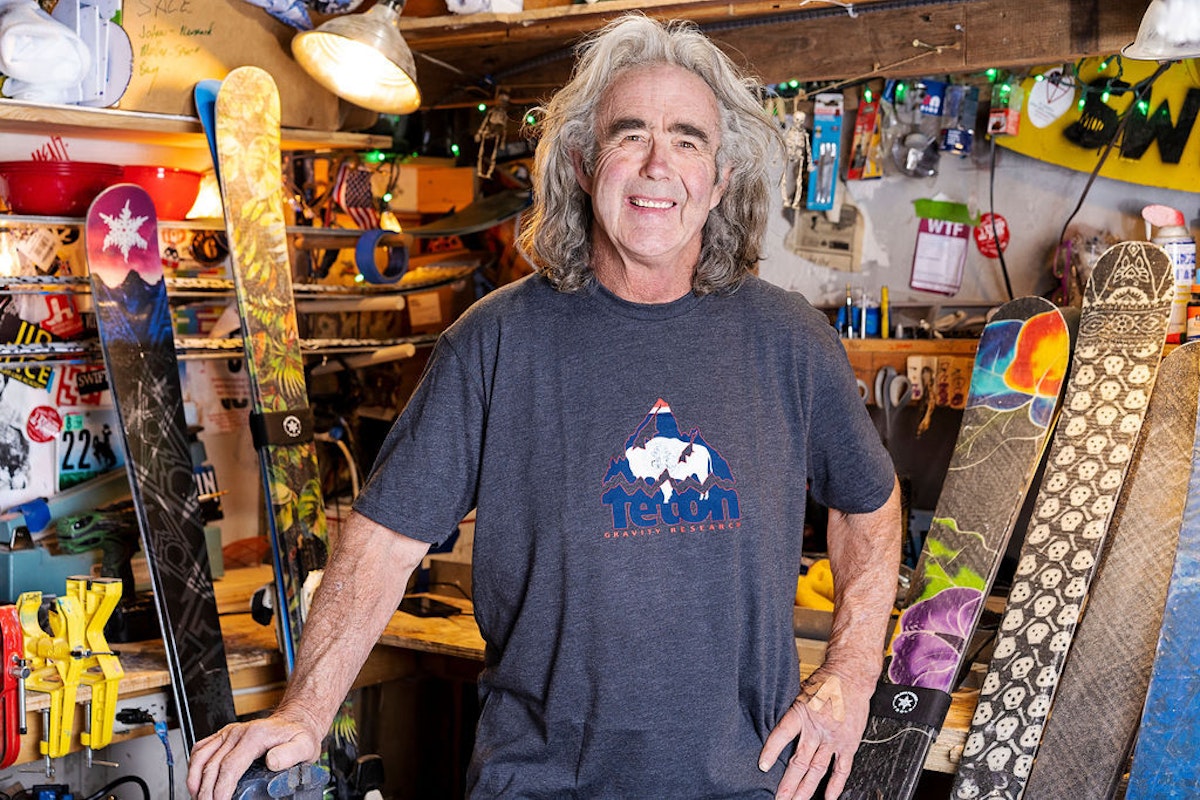 Captain Benny Wilson in his workshop with his handmade Wilson Powder Tools skis.

The Jackson Hole Air Force was a group of diehard skiers that set out to push the boundaries. Known for ducking ropes to poach the best powder, skiing the steepest lines and sending the biggest cliffs, they quickly made a name for themselves in the 1980s as rebels. Operating under a veil of secrecy, the group of powder hounds grew into something of mystery. They skied the mountains like ghosts, swift and silent, in search of deep snow without tipping off the ski patrol to their antics. At the helm of the JH Airforce: Captain Benny Wilson. After being chased relentlessly by the ski patrol, the ragtag group — outlaws in their own right — eventually helped revolutionize open boundaries at Jackson Hole Mountain Resort in 1998.

Today, you’ll still see Wilson out ripping turns and hitting up his favorite stashes across the mountain, smiling ear to ear. These days, however, patrollers aren’t hot on his heels. His free spirit holds true. Often sporting a top hat and an outrageous ski outfit, Wilson defines old-school cool. He serves as an inspiration for younger skiers, who vie for a coveted Air Force patch, the closely guarded badge of honor that defines you as a mountain shredder. He’s even taken up creating his own custom skis, handmade in his garage. Does a Wilson Powder Tools ski rip? Maybe. Does it come with a little bit of legend built in? We’ll let you decide.

Written and photographed by Apres Noon. 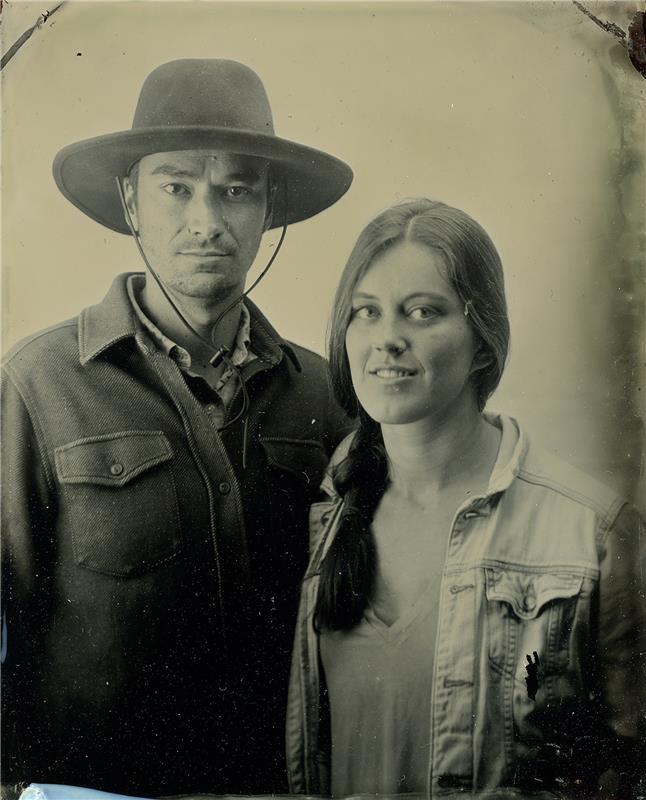 Après Noon is a storytelling duo. One part Shannon Sollitt one part Jonathan Crosby, the pair is dedicated to telling authentic, engaging stories. They’re both experienced journalists with a thirst for adventure. They call Jackson Hole home.

Biking in the Tetons

Tips and tricks for traveling on two wheels.

Beavers and Bison and Bears, Oh My!

How to be good guests to the local wildlife in Jackson Hole.

How to make your visit more sustainable.